Sadly, fraud is a constant threat to all sectors, and the public sector is no exception. The public services we all work to deliver are funded by public money, and people will always be tempted to ‘step over the line’ and defraud the system. When they do, the services many of them rely upon are damaged, as is our reputation in delivering those services.

In August, for example, an NHS manager, who had raised £650,000 of fraudulent purchase orders to fund the lavish development of his and his friends’ homes, was convicted of fraud. As a result of his actions, money was taken from the system that could otherwise have paid for medical treatments or healthcare staff salaries.

The public expect us to find fraudsters like these, in order to protect taxpayers money; and government takes this expectation seriously. Furthermore, it recognises the importance of the particular skills and infrastructure needed to meet the expectation. That is why we are introducing a professional structure for our counter fraud specialists; and why the launch of the new Government Counter Fraud Profession (GCFP) this October has an important message for fraudsters: “government is not a soft target”.

However, the fight against fraud is not just the responsibility of those who will become part of this new profession – everyone has a role to play. In this article we will focus on three key points:

1. You shouldn’t underestimate the threat and likelihood of fraud

3. The GCFP will help the public sector to protect public services and fight economic crime 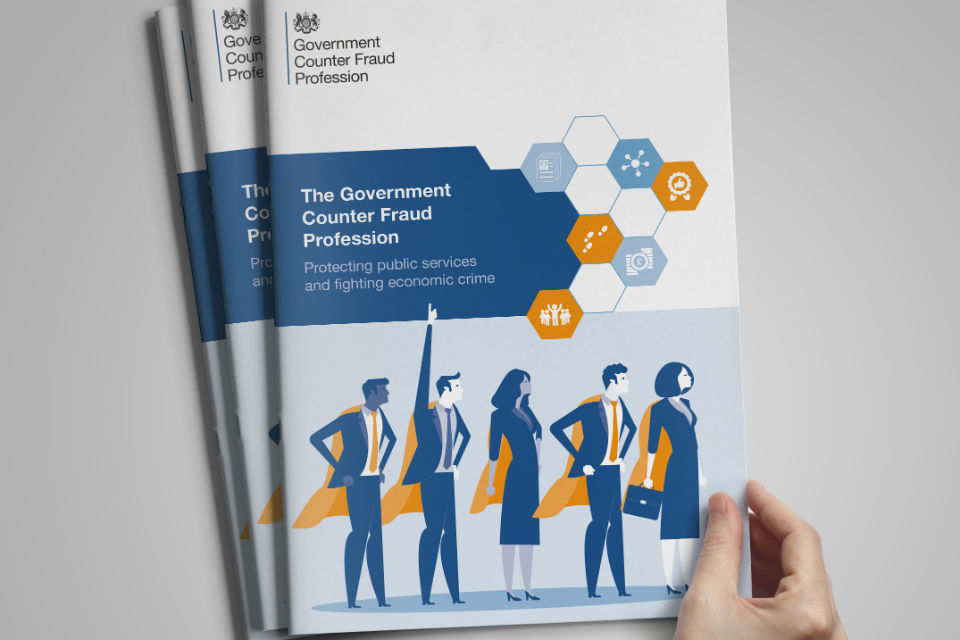 Don't underestimate the threat and likelihood of fraud

Fraud is inherently a ‘hidden’ crime, which means we only know about it when we find it. Research carried out by the Cabinet Office’s Centre of Expertise for Counter Fraud points to one undeniable fact: fraud is very likely to be present in any large organisation, even if it is not immediately visible.

If you think about our individual experiences of fraud, it is highly likely that you or someone you know has been a target of some type of fraud; perhaps relating to the cards we use to make payments, an online scam, or being overcharged for a service we have received. Fraudsters attack where there is opportunity. What’s more, as a non-physical crime, the rewards can often feel as if they outweigh the risk, making it an attractive crime for opportunists.

What this means is that fraud is out there, and we should not think that public sector organisations are any less likely to be a target.

Based on data from fraud measurement programmes in the UK public sector, available comparators from other sectors and administrations, and the research of academics, government estimates fraud loss across the public sector at between £31 billion and £49 billion every year*. That’s why the government is committed to finding and preventing more fraud – and to do this, we need skilled counter fraud people in every part of the public sector.

Fraud is increasingly complex, and the types of attacks on our public services vary significantly. They range from an individual providing or withholding accurate personal information in an application form, to a group working together to manipulate a procurement process. Also, as technologies evolve, the means by which these crimes, and other forms of fraud, are carried out is also becoming more complex and varied.

As well as the high-profile fraud cases committed by organised groups that we read about in the news, there is all the low-volume fraud committed by opportunistic individuals. These people are often under significant pressures, financial or personal, and commit fraud as a means of rectifying the challenges they see in their lives. Others are motivated solely by personal gain. Attacks on the public sector come from outside; but, sadly, also from within.

The skills needed to fight fraud are similarly complex and becoming increasingly so. Over years of development, more and more areas of counter fraud expertise have developed to help effectively combat fraudsters. This is reflected in a highly skilled population of around 10,000 counter fraud specialists working across government, as well as in local government and our police forces.

These public servants work  in a variety of roles, such as investigation, intelligence, policy and process review, and management. And they can specialise in areas such as benefit fraud, tax fraud, insolvency, money-laundering or bribery and corruption. They sit in the organisations you might expect, such as the Department for Work & Pensions or HM Revenue & Customs, but also in parts of government you might not, such as HM Land Registry and the Student Loans Company.

Fraud and economic crime has not traditionally been an area of cross-government focus. Organisations developed their own response, and the skills and learning environments designed to support their staff have reflected this diversity.

The independent evolution of capability has had one main drawback. Much of the knowledge, skills and experience that help counter fraud specialists succeed is common across organisations. Yet, without a coordinated approach, the skills and experience developed in one part of government have not been shared with others.

The GCFP tackles this issue. It provides a structure within which our counter fraud capability – responding to this increasingly complex and diverse crime – is codified and made transparent. This enables organisations and individuals to enhance their capability against these common standards and for government as a whole to get better and better at finding and preventing fraud.

The Government Counter Fraud Profession is here to help

Where government’s counter fraud specialists were previously separated in silos, there is now a professional structure that brings them together as one community. The list of benefits this will bring, in terms of collaboration, the sharing of information, expertise and best practice, is long, both for individual specialists and the organisations they work for.

For instance, there are the Professional Standards and Competencies, which underpin the GCFP. These detail the knowledge, skills and experience needed in a variety of counter fraud areas, known as ‘disciplines’ (see the graphics below). The disciplines move beyond the traditional focus on investigation, to incorporate other areas of counter fraud activity, such as risk assessment, prevention and cyber-fraud.

There are 10 Core Disciplines and 5 Sub-Disciplines in the counter fraud framework:

Each discipline (in this example, Investigation) breaks down into Key Components, and then individual Elements, against which members can assess themselves:

Built upon these standards, the GCFP enables:

• organisations to understand the skills in counter fraud

• the development of discipline-specific training

The GCFP will help all public sector organisations to understand what building counter fraud capability looks like, as they will be able to work from a common structure and body of knowledge.

A profession built on four principles

How we built the profession is just as important as why. Delivering large cross-governmental initiatives is not easy, but the Professionals Board – which oversees the development of the profession – remain committed to four guiding principles:

1. Choice – Appreciating the culture and governance of the public sector, all organisations and individuals have a choice in how they engage with the GCFP. This principle has run right through the profession’s development, including how to join.

2. Collaboration – This stretches beyond the 18 organisations represented on the GCFP Board. The profession has had input from over 100 external organisations, through its Cross Sector Advisory Group, Practitioners Advisory Group and Working Groups.

3. Empowerment – Practitioners from the counter fraud community have been involved in shaping the GCFP, and the standards that underpin it. This is their profession; and how it works in five years’ time is for them to determine.

4. Pace – As anyone in counter fraud will tell you, there has been a real need for the profession for some time. However, we have not rushed the GCFP’s development. We have remained focused on delivering quality products but at a good pace.

Guidance from the private sector

The emphasis on ‘collaboration’ was paramount, which is why we were keen to work with other sectors from the outset. If you look inside some private sector organisations, such as banks, you’ll see a much more sophisticated counter fraud infrastructure. They will all have comprehensive dashboards and a full view of their current fraud risk exposures and how they’re addressing them.

In the public sector, we’re not quite there yet – but it’s where we may be going. This is why the Cross Sector Advisory Group has been such a vital source  of challenge, guidance and idea-generation. The group’s contribution to the development of the Professional Standards and Competencies is particularly noteworthy. Group members have also helped us think about how the GCFP may one day roll out into other sectors, including the third sector.

A role for everyone

It is unrealistic, and undesirable, for every civil servant to be thinking every minute about how to counter fraud. Of course, those not working directly in counter fraud need to focus on the other big challenges facing departments and the wider public sector.

However, dealing with fraud is vital to the future efficiency of our public services and it is the responsibility of every civil servant that our taxpayers’ money is spent on those services that are needed the most.

That’s why we all have a role to play in the fight against fraud.

This is where the public sector is heading, and the Government Counter Fraud Profession is set to be a key player in helping all public servants and their organisations to stop fraud and protect public services.