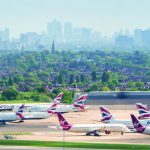 Monday 25 June 2018 was the day Parliament voted overwhelmingly in favour of a new piece of airport policy. With a majority of 296, you would be forgiven for thinking this was a straightforward decision for MPs. But the vote was about airport expansion; the proposed location was Heathrow; and the outcome was an historic moment.

The scale of this achievement becomes apparent when you consider that the Heathrow expansion debate has experienced intense turbulence for 50 years. From 1968 to now, numerous reports and independent commissions have been set up, and nearly all have concluded that the country needs a new runway at Heathrow. Clearly, there is something of a theme.

Britain has the third largest aviation sector in the world – second only to the USA and China. It is a critical national asset – contributing an annual £22 billion to our GDP, employing 500,000 people, and carrying 285 million passengers and 2.6 million tonnes of freight each year.

However, our airports are filling up. Heathrow has been running at full capacity for years. Evidence shows that the other London airports will be full by 2030. The need for increased capacity is ever-growing, and a policy was needed, especially in light of the UK’s decision to leave the European Union.

Heathrow is the busiest two-runway airport in the world. As we sat on our hands and pondered the options for expansion, the rest of the globe was taking action. Heathrow hasn’t had any runway development since 1970. Meanwhile, major competitors like Dubai (four runways), Frankfurt (four) and Schiphol (six) were taking passengers away from Heathrow and expanding their hubs. We were falling behind in the aviation race.

So, what did we do? In 2016, after a careful review of the Airports Commission’s final report and all the evidence, the Government accepted the recommendation and confirmed its preference for a new northwest runway at Heathrow. This was not an easy decision. All three schemes had their own strengths and weaknesses, and careful work was required to ensure the relative merits were assessed carefully and impartially. Our job as civil servants is to tune out the political rhetoric and campaigning around such projects. Extensive analysis was required to ensure ministers were able to take a decision based on robust evidence – not least as it would inevitably be (and is being) challenged in the courts. 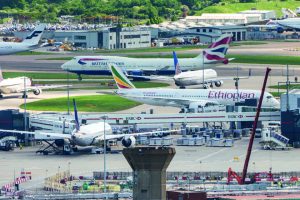 The expansion of Heathrow naturally brings with it a significant impact on local communities, including important effects on things like noise, air quality and road traffic congestion. Just as important as examining the case for expansion is understanding these impacts and ensuring that the proposals address them. What followed was a 16-week consultation on the Government’s proposals, which ran from February to May 2017. To encourage people to take part, we carried out a large-scale publicity campaign, including delivery of 1.5 million leaflets to households around the airport; press adverts in 22 local newspapers and three commuter newspapers; radio adverts on national and local radio stations; digital adverts; Facebook adverts; and targeted engagement with ethnic minority communities.

We ran 20 local consultation events in the areas around Heathrow, and worked with local authorities to identify suitable venues and raise awareness of the consultation. Over 100 Department for Transport volunteers staffed the long days and weekends to offer the public, particularly those around Heathrow, an opportunity to review the plans and ask questions. A scheme like this is never going to please everyone, and we needed to address the impacts on those living closest to the airport, and the potential adverse effects on their quality of life. The Government believed that the scheme was in the national interest and that its benefits outweighed the negatives, but that it was vital to acknowledge its impacts and set out plans for a world-class package of compensation and mitigation.

When the local events concluded, we travelled around the UK, including to Edinburgh, Glasgow, Belfast, Liverpool and Newcastle, for 12 regional consultation events. Just as we were ready to publish the final pieces of evidence for consultation, we were as surprised as everyone by the announcement of a General Election, and the uncertainty it brought to a decision on a new runway.

We waited with bated breath for the election result in June 2017, given the range of positions on expansion held by the political parties. In the end, the Conservative victory – albeit with the challenges a minority government presents – meant that Heathrow expansion remained on the table. However, we still needed to publish recently updated economic evidence. In October 2017 we ran a further consultation, this time for eight weeks.

The two consultation periods combined amounted  to one of the largest consultation exercises ever undertaken by government, receiving over 80,000 responses, which required careful consideration.

For both phases of the consultation, we engaged the services of an independent adviser, Sir Jeremy Sullivan. A former Court of Appeal Judge, Sir Jeremy’s role was not to consider the merits of Heathrow expansion, but to be a further critical eye on the consultation process, to ensure that it was as fair, accessible and legally sound as possible. After all, it was not the first time this subject had been consulted on, and we wanted to explore every possible avenue for proper process. Sir Jeremy reported back after both consultation phases and the reports were published online. He concluded, overall, that best practice had been followed.

The next stage of the process was Parliamentary scrutiny. The Transport Committee took extensive evidence before publishing its report in March 2018. Overall the committee was in favour of a new runway at Heathrow, highlighting areas they felt needed further consideration.

After carefully considering the committee’s recommendations – and almost three years after the Airports Commission’s final report recommending Heathrow’s northwest runway as the best scheme to deliver much-needed new runway capacity – the Government decided it was time to lay a final proposal in Parliament.

On 5 June, the final draft of the Airports National Policy Statement (NPS) – the policy framework for a new northwest runway – was laid in the House of Commons. Alongside this, nearly 2,000 pages of evidence were published online. This was the culmination of months of work developing the policy proposals and, later, taking into account the views of  the thousands who replied to the consultations. We had been working closely with stakeholders and produced digital content for each region; a Summary Document that explained our position without the need to trawl through swathes of evidence; and regional factsheets for bite-size information on what expansion at Heathrow would mean for different parts of the UK.

What followed included 69 Parliamentary Questions, an Urgent Question and a flurry of correspondence to the department. The next phase of work was planning for the MPs’ vote – which could take place any time within 21 sitting days of laying of the NPS.

The communications team delivered a plan of positive coverage – a news story each day reiterating the case for expansion. For MPs around the UK to be able to vote, we had to explain what it meant for them and ensure they had all the information on which to base a decision. We worked closely with stakeholders to explain the benefits of the scheme, including increased airline connectivity within the UK, and a pledge that around 15% of new slots would be reserved for domestic connections. With increased long-haul destinations come increased opportunities for businesses around the UK to reach new markets.

Following a final push of intensive media and stakeholder engagement, decision day was upon us. MPs from both sides of the House joined in the debate. At around 10pm the votes were in. Ayes to the right: 415. Nays to the left: 119. A decision at last, in favour of expansion at Heathrow.

The scheme is now with Heathrow Airport Limited, which has to develop a planning application, known as Development Consent. We are still some years away from being ready for take-off on the expansion of Heathrow, but we have come a long, long way.