This year we have seen increasing challenges to the security situation in Europe and the rules-based international system on which we all depend. A recent and shocking example was the nerve agent attack in Salisbury in March. This brazen and reckless act threatened the lives of Sergei and Yulia Skripal, those who came to their aid and the wider public. Only the Russian state has the technical means, operational experience and motive to target the Skripals in this way.

It is in these moments that we rely on all parts of government to protect us. Some of these are obvious, such as the Ministry of Defence (MOD), Home Office and Public Health England; others perhaps less so, such as the Department for Environment, Food and Rural Affairs (Defra).

All played a crucial role. In this article I want to talk about some of the less visible work that was vital to dealing with this most unusual and dangerous event.

At the beginning of March the MOD deployed over 180 Service personnel to assist in the cross-government response to the Salisbury attack. Even before this, from the moment the attack became apparent, scientists from the MOD’s Defence Science and Technology Laboratory (Dstl) had been providing expertise in identifying the substance used and advising on how to deal with it.

That Dstl was able so quickly and so accurately to identify the nerve agent was vital in different ways. It enabled the medical staff at Salisbury Hospital to design and implement life-saving treatment for the Skripals and Detective Sergeant Bailey, who had come to their aid. Working with colleagues from across national security, Dstl’s involvement enabled the unequivocal attribution of the attack to Russia. In today’s world, with so many ‘deniable’ technologies being used by so many different actors, the ability authoritatively to point to those responsible and act accordingly is indispensable.

On the ground, very quickly Dstl experts began to work shifts so that they could provide critical advice 24/7 for the police and military personnel responding to the incident. Their flexibility allowed for timely and accurate advice, not just for the areas impacted by the nerve agent, but also on personal protection measures for on-the-scene responders and NHS staff.

What really struck me was the scale and complexity of the response. Dstl took more than 1,000 samples from multiple locations to determine the level of contamination in the city. This included recovering hundreds of items for forensic analysis; a huge logistical effort, with the logging, testing and storing of each item. A priority exercise, this forensic analysis has informed the clean-up work led by Defra to bring the contaminated sites back into safe use for the people of Salisbury.

In addition to the logistical challenges, the safety precautions for the team working on the scene were extensive and time-consuming. Precautions for staff included the preparation of special personal protection equipment and the taking of daily blood samples – up to 100 blood tests per day, including for the emergency services and military personnel involved. For a team that would normally process around 40 blood samples a week, this was an enormous increase in the volume of work. However, it was vital to guaranteeing the safety of those responding to the attack and ensuring the containment of the affected areas.

At the same time that this work was happening, a huge amount of cross-government collaboration was taking place. From the outset, national and local-level working groups were set up, involving a number of departments as well as scientists, health professionals and the military. These working groups provided timely and accurate updates to senior officials and ministers, keeping them abreast of developments and able to make informed decisions – for example, supplying the scientific advice to determine the best decontamination process.

Cross-government collaboration extended well beyond Whitehall. Defence civil servants were temporarily posted to Salisbury as Government Liaison Officers to assist in local planning efforts. Specialist military teams from across the Army, Royal Air Force and joint organisations, provided with scientific evidence and guidance from Dstl, have been deployed to deliver elements of Defra’s recovery plan. This decontamination effort is proving successful, with many of the affected areas made safe and fully open to the public.

Given the heightened level of risk following the Salisbury attack, a key role for MOD was to instruct on the protection and resilience of our people, bases and infrastructure overseas. We also played an important part in support of the government effort to ensure an international response to the attack. This work saw MOD ministers, senior officials and defence attachés engage across the world.

I would also like to thank our colleagues behind the scenes who make the visible ‘main effort’ possible. Caterers, cleaning staff, business management teams and others across government have gone above and beyond their day jobs or normal working hours to support the sudden need for additional resource.

Work on the Salisbury incident continues, and it will be a while until we can fully evaluate the cross-government effort. In the short-term, however, the resilience of our staff in these challenging situations has been exemplary. I am not just referring to people working in Whitehall or at other department hubs. Our agencies and arm’s-length bodies comprise thousands of people who have worked tirelessly to respond quickly and effectively to these threats.

Dealing with a situation such as the Salisbury attack requires a comprehensive and joined-up effort across government, and important decisions must be made and implemented quickly. The co-ordination and complex project management required to get people where they need to be, to do the jobs they need to do, has been seamless. At times like these I am reminded that, regardless of department or job role, we all work in government for the same reason: to serve the public and keep the country safe.

Dstl also encompasses the Forensic Explosives Laboratory (FEL), which is funded by the Office for Security and Counter-Terrorism (OSCT) at the Home Office. FEL has provided crucial work in support of many recent counter-terrorism investigations.

After the attack, OSCT commissioned the Royal Society and the Defence and Security Accelerator (DASA) to seek innovative ways to help protect against future attacks. A wide range of experts from industry, academia, the police and government were engaged, leading to a subsequent DASA competition on ‘Improving Crowd Resilience.’ This has resulted in a number of promising projects being taken forward. These range from a proposal from QinetiQ to develop a crowd emotion ‘heatmap’, to a bid from the University of Southampton to use visual perception research to enhance a crowd’s ability to detect threats.

Dstl is made up of over 3,000 technical specialists and scientists, allowing them to deliver defence- and security-related science and technology to over 40 government partners. Organised into six key areas, Dstl leads on a range of different activities to ensure the protection of our troops. 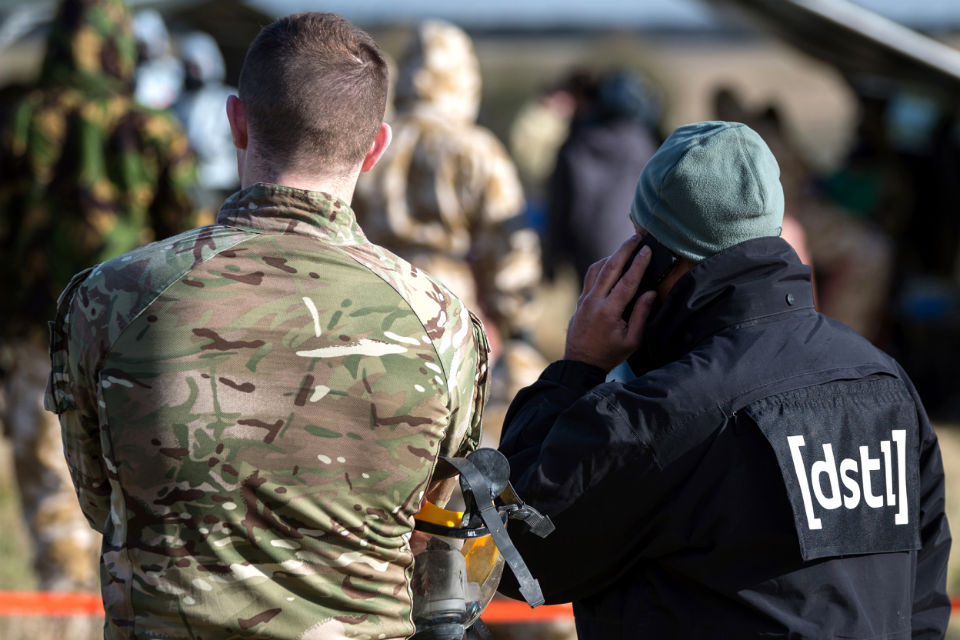 Work ranges from the use of system engineering to develop the Future Soldier Vision and armour protection, to solving the complex policy, planning and operational problems associated with our activity across the world. In September 2017, Dstl were on hand to monitor our work delivering humanitarian aid in the Caribbean after the devastating hurricanes that hit the region.

As the threats we face change and intensify, so do our skills. Recently, the Centre for Applied Science and Technology transferred from the Home Office to become part of Dstl, bringing with it unique capabilities and expertise to make the laboratory a more resilient and capable organisation.

Importantly, the transfer of S&T capability from the Home Office means that Dstl now supports a wider range of security and policing partners. This helps to ensure that science and technology are further harnessed to support justice and security.