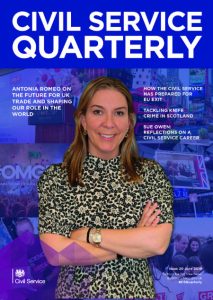 Welcome to the 20th edition of Civil Service Quarterly.

Although there is no formal theme running through this edition, several articles either focus on or significantly mention the work of the Civil Service to prepare government and the country for withdrawal from the European Union and a new global role.

In our lead article, Matthew Coats, Director General, EU Exit Implementation, looks in detail at the wide-ranging preparations for withdrawal – in any scenario, including the possibility of leaving with ‘no deal’. He reflects on the “scale and urgency” of the Civil Service response, characterised by collaboration and shared understanding of the issues. Without this, he concludes, the level of preparedness achieved by 29 March for ‘no deal’ would not have been possible.

As one of the departments most affected by exiting the EU, Defra offers a case study of how the Civil Service has “raised its game” to prepare for it. Senior policy adviser Tamsin Growney gives a detailed account of the depth and breadth of work required to ready the department, and how this has influenced the way Defra sees itself operating in the future.

Turning to other matters, Scottish Government Permanent Secretary Leslie Evans recounts how policy towards tackling knife crime in Scotland has undergone a sea change over the last decade, with striking results.

Meanwhile, Sue Owen, retiring Permanent Secretary at the Department for Digital, Culture, Media & Sport, looks back at
a Civil Service career of great variety and achievement. This has taken in spells at No. 10, HM Treasury and DFID, as well as DCMS. She talks about the guiding principles of her career and about what has changed - and, in some cases, stayed the same - over the course of it.

Our Spotlight feature in this edition is trained on the Government Economic Service (GES), and its delivery of the UK’s first economics degree apprenticeship. A priority for the degree programme was to secure applicants from a diverse range of backgrounds. Two GES professionals describe how they set about this.

Twenty years after the creation of devolved administrations in Scotland and Wales, and the establishment of a new Northern Ireland Assembly, Welsh Government Permanent Secretary Shan Morgan lays out 10 lessons we have learned from devolution.

The simple explanation of what actuaries bring to government is that they help decision-makers to understand the challenges around financial risk and uncertainty, spend wisely and save money. As Government Actuary Martin Clarke explains, experts in his department make a vital contribution to issues that can affect us all, from the cost of pensions, to amounts paid out in personal injury claims, and planning financial assistance for those affected by natural disasters.

Civil Service Chief Executive John Manzoni considers how applying the principles of Smarter Working is supporting the wider transformation under way to create a brilliant Civil Service that is a great place to work. The latest of our articles focusing on civil services in other countries comes from the outgoing Finnish Ambassador to the UK, Päivi Luostarinen. She argues that
her nation’s consistently high ranking in international measures of happiness and stability stems from a high-performing public administration based on values such as equality and transparency.

Returning to matters related to EU Exit, we close this edition with an interview given by Department for International Trade (DIT) Permanent Secretary Antonia Romeo. Antonia talks about how DIT is helping to shape the UK’s place in the world.

You can give us your views and comments on the Civil Service Quarterly blog, by email, or via #CSQuarterly on Twitter. If you would like to submit an idea for a feature in a future edition, please get in touch.

We will publish each of the articles in the latest edition of Civil Service Quarterly (CSQ 20) as a blog post. If you would like to see the full publication, you can download it here as a PDF.