Economics, the so-called ‘dismal science’, has had a somewhat dismal press recently. Voices from the media, politics and the economics profession itself have labelled economists as too detached from the real world, hardwired to get things wrong, and even as the practitioners of a discipline “in crisis".

While the validity of these criticisms can be debated – many have argued in defence of mainstream economics – economists in the Civil Service cannot be complacent.

The vast majority of the roughly 1,500 government economists aim to provide analytical policy advice to ensure that policy delivers true value for money, is delivered efficiently and effectively, and has the greatest impact on society. Their roles can be summarised as:

As such, government economists tend to work on mainly microeconomic issues in multidisciplinary teams spanning everything from transport to childcare.

However, the public debate is a reminder that in order to remain relevant and influential, and to make sure that policy is informed by the best possible analysis, all economists must strengthen and broaden their capabilities. They must look for solutions and engage with others outside their traditional domain, as well as developing a much stronger appreciation of history in order to draw on the lessons of the past. Just as importantly, they need to be vigilant against ‘groupthink’ and ensure that alternative voices and approaches are heard. This is often linked to ensuring there is a diversity of background within the profession. As the Governor of the Bank of England put it recently, the more that ideas are shared, the better we will be at making decisions.

The GES 2020 Strategy, published last autumn, acknowledges these challenges as it outlines a plan to strengthen the economics profession in the Civil Service. It commits the GES to become more open and outward facing, working closer with  other analysts and policy professionals, as well as the wider economics profession, in order to maximise the impact that economists have on policy. This approach is underpinned by the encouragement of debate and the promotion of diversity in thought and background, alongside increased analytical rigour. In other words, good economics is about the culture it springs from.

In the spring of 2016, a group of civil servants formed Exploring Economics, a new network with two aims:

The network has grown rapidly, and now has several hundred members across the Civil Service.

Working together, Exploring Economics and the GES are taking an open, diverse and cross-disciplinary approach to meeting the challenges faced by the economics profession. 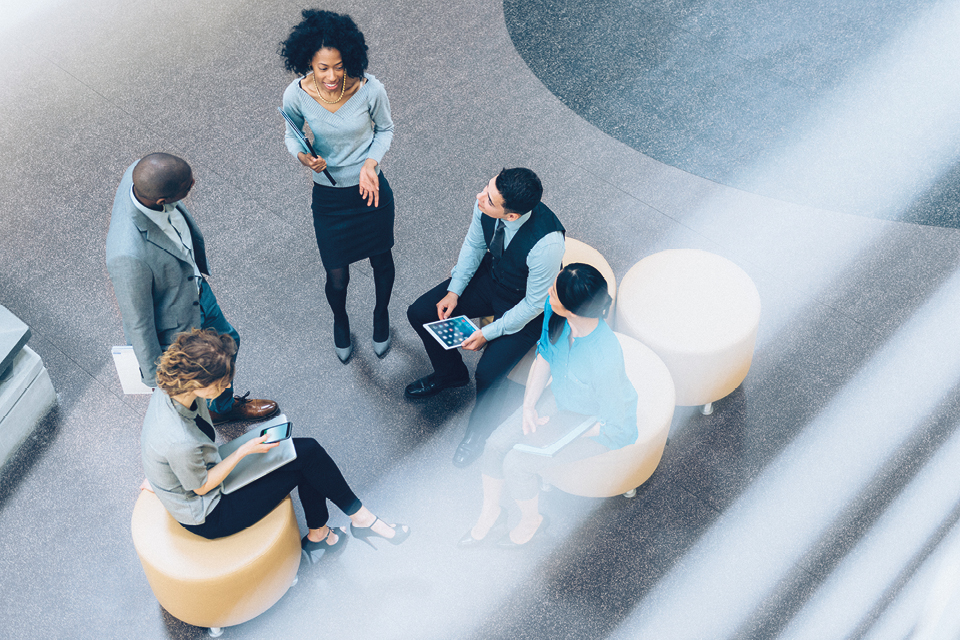 As set out in its strategy, the GES is becoming increasingly outward facing. The new policy and analytical questions facing government economists mean that it is vital to be able to draw on outside expertise. The GES is facilitating this by strengthening its links with the wider economics profession, through new partnerships with organisations such as the  Society of Business Economists or the Indian Economic Service.

GES economists also recognise that producing robust, influential analysis needs more than just economic insights. They have to be able to work flexibly and nimbly, using modern tools across the analytical, operational and policy disciplines. In that spirit, the analytical professions, including the GES, along with other data disciplines have recently joined together to create the Civil Service Analytical Function Board, which will formally link into the Civil Service Board. This will give analysts a stronger voice at the top of the Civil Service, a more strategic approach to developing talent and coordinating work, and will ensure that when acting together, the analytical professions are more than the sum of their parts.

Supporting GES initiatives to raise awareness and understanding of economics among civil servants, Exploring Economics has set up a series of events, Unpacking Economics. These events explain economic ideas in an accessible way and encourage open discussion. Civil servants of all backgrounds attend – from the casually interested, to those with PhDs. So far, topics ‘unpacked' include valuing life in monetary terms; what is actually meant by ‘the economy’; and the pros and cons of GDP as an economic indicator. These events have stimulated debate and critical thought about key economic concepts and how they are applied to policy, to the benefit of economists and non-economists alike.

Exploring Economics is also creating an accessible guide to the Green Book, the Treasury’s main guidance document on evaluation and appraisal in government. This will introduce policy professionals to the economic concepts that underpin the book, and facilitate a discussion of its underlying assumptions.

The efforts to raise the understanding of economics and analysis across the Civil Service are ultimately aimed at fostering a cultural change. A shift towards an environment where there is less focus on a ‘magic number’, more awareness of risk and uncertainty in analytical evidence, and more debate and challenge from all sides will lead to better policy making.

Therefore these open and outward-facing approaches are not only making it easier for economists to draw on a wider pool of expertise, but also to improve the quality and impact of analysis in policy advice.

Diversity consists of both intellectual – or cognitive – diversity, and diversity of identity or background. Often these are intertwined, and the absence of either presents significant risks for the quality of advice economists in the Civil Service are able to provide. Greater diversity forces others to think more critically about their own views and makes challenge more likely. It not only offers fresh perspectives, but also can improve the quality of existing economic thinking and analysis.

Exploring Economics and the GES are explicitly building in greater diversity of economic perspectives into the training curriculum for government economists, through a series of new modules. These will encourage economists to learn about and discuss new and alternative economic approaches and apply these to questions of policy. Modules will include learning opportunities on behavioural economics, which looks to incorporate insights from psychology into economics; institutional economics, which focuses on the role institutions play in shaping economic behaviour; and feminist economics, which helps us to recognise the implications of gender roles in the economy. All will be set within their historical context; with an appreciation of historical changes built in throughout. This interdisciplinary appreciation of the diversity in economic approaches will improve the tools available to government economists, and broaden the debate within government.

Diversity of background is intimately linked to these issues, and is essential in preventing confirmation or unconscious bias. Gender diversity remains an issue for the economics profession, with the GES mirroring the wider profession with women making up roughly a third of economists (as the chart below shows). Improving socio-economic diversity is another concern identified in the GES Strategy. That being said, the latest GES entrants are representative of the population in terms of Black, Asian or Minority Ethnic (BAME) background. 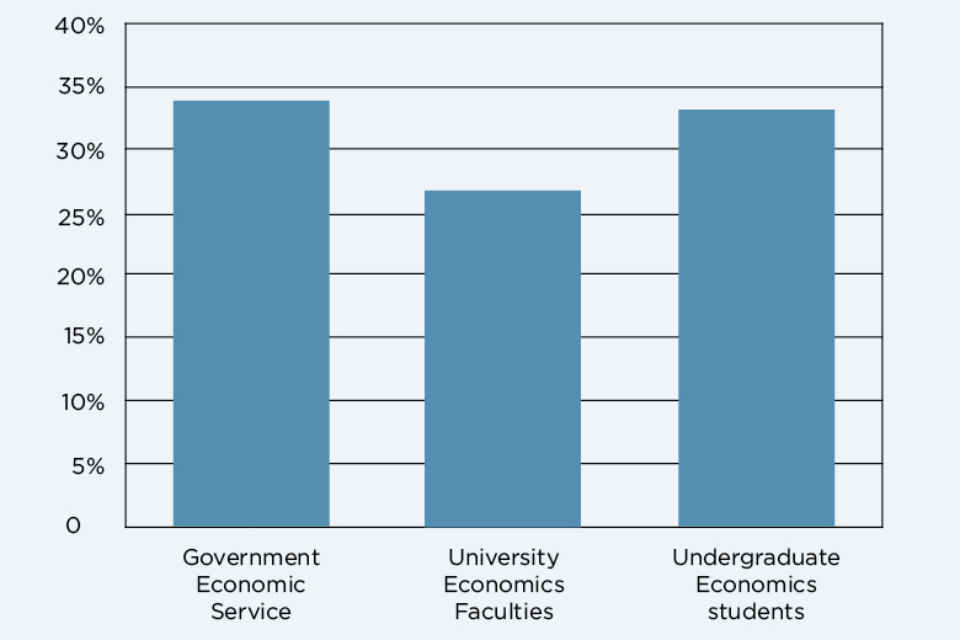 The under-representation of women in economics stems from a low proportion of women choosing to study economics. To tackle this, the GES is joining up with universities and other employers of economists to promote various ‘Women in Economics’ initiatives, encouraging women to study and work in the profession. The GES is also  actively showcasing  excellent female role models and  success women have had as government economists, alongside putting additional resources  into marketing, specifically towards female economics students.

The GES is also leading the development of a degree-level Economics Apprenticeship, as an important route to improving socio-economic diversity within economics. The apprenticeship will be aimed at school-leavers and individuals without formal economics degrees, combining on-the-job experience with university-accredited study. Upon completion of their apprenticeship, individuals will be able to work as highly effective professional economists in the Civil Service and elsewhere.

Large, multi-disciplinary and diverse networks such as Exploring Economics are themselves helping to make government economics more accessible to civil servants of all backgrounds. 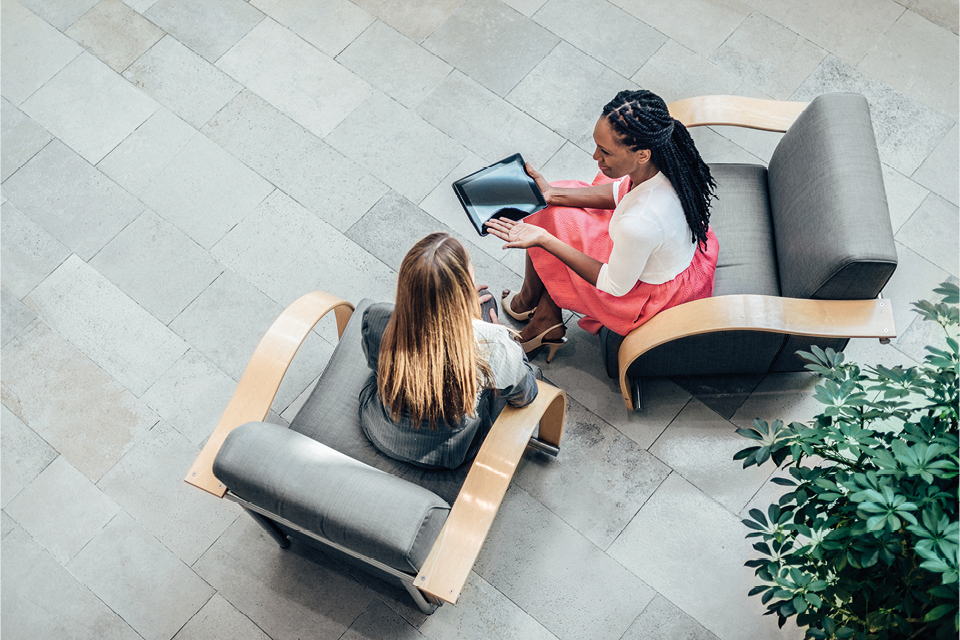 More to be done…

These steps are all part of government economists’ response to the criticisms levelled at economics. Yet there is a longer-term goal: to foster a culture where challenge is welcomed; where knowledge flows more freely and openly across disciplines and the wider economics profession; and where a rich variety of economic ideas and approaches is encouraged and celebrated. Such a culture will only strengthen the quality, relevance and impact of economic analysis within the Civil Service.

Much more remains to be done. If you are interested in the work of Exploring Economics you can join the mailing list here (civil servants only). To find out more about the GES, go to www.ges.gov.uk.

What do the new generation of economists in government think of the profession and the aims of Exploring Economics?

I chose to join the Civil Service partly out of curiosity and partly to make a difference and to have the opportunity to influence policy in a meaningful way.

I currently work in Disability Benefit forecasting. The key lesson I have taken from this role has been that your models are only as good as the assumptions you put into them. This is what takes up the majority of my time, trying to understand and assess the validity of the assumptions we have made and the implications they have on our forecasts.

Economics as a discipline can be quite dogmatic, and this has often meant that one particular way of doing economics has tended to prevail. Exploring Economics provides a cross-government impetus to remedy this problem. By opening up the discussion of economics across a range of professions, and introducing a diverse range of perspectives, the network aims to infuse a stronger and more critical understanding of economics both within and outside the profession. This will allow us to improve the way that we use economics within the Civil Service and better address some of the challenges we will be facing in the future.

Having studied Economic History as part of my university degree I was really keen to be part of a civil service network that explored new ways of thinking about economics.

Exploring Economics has provided me with the perfect opportunity to find out more about different approaches and start to think about how I can apply them in my analysis as a government economist. I have found the Unpacking Economics event series has encouraged me to think differently about key economic concepts, such as GDP.

As a new economist in government, the greatest benefit I have received from being a member of Exploring Economics, is the network of economists and non-economists I have met who are keen to discuss and debate economics and its use in analysis and policymaking.