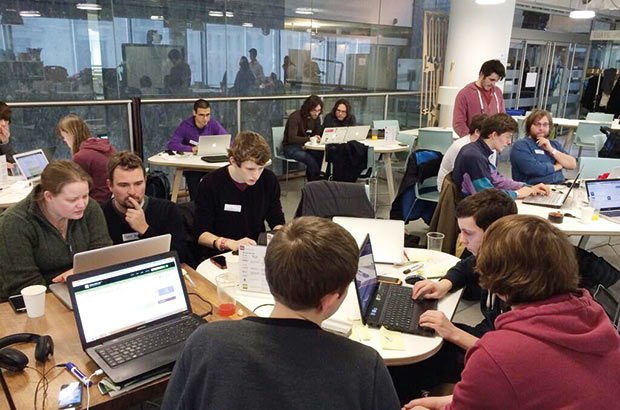 Government departments like the Foreign & Commonwealth Office are just beginning to understand the value of hackdays, or hackathons. A hackathon that recently helped recent flood victims shows what can be done, says Gerard Grech, CEO of Tech City UK.

With more than 30 co-working spaces in Tech City alone, London’s tech community knows a thing about collaboration. Across Shoreditch and beyond, people come together on a daily basis to exchange ideas, bounce concepts around and gather inspiration. And when those people are programmers working towards a shared goal, the word ‘hackathon’ is often attached. A hackathon is a gathering – typically involving software developers and computer programmers – who join forces for a short but dedicated stretch of time, and pool their expertise to work on a specific project, finding innovative ways to build or enhance services and applications.

Usually restricted to just a day or sometimes a weekend, hackathons are intense sessions and, as such, the outcomes are inventive and original. Earlier this month, following the extreme weather and flooding that severely affected parts of the country, the Government called on Tech City UK as a convening hub for digital innovation, to mobilise the tech community to help.

In less than 24 hours, Tech City created #floodhack, appealing for volunteers from across the tech community to give up their Sundays and apply their programming skills for the benefit of flood victims. On 16 February, more than 200 developers signed up and came together at Tech City’s Google Campus to devise digital solutions to aid impacted communities. Engineers and individuals from the likes of Google, Facebook, Conversocial, Twitter, Microsoft, Datasift, Twilio, Nominet Trust, TechHub, SKHub, Shoothill, Session Digital and Inviqa also leant invaluable support and helped make the hackathon happen.

The key to #floodhack was the availability of Government data. Over a 48-hour period the Transparency Team in Cabinet Office, who lead the Government’s Open Data agenda, worked closely with colleagues in No.10, the Department for Environment, Food and Rural Affairs, the Environment Agency, and the Government Digital Service to release data which had until then been restricted and sold to a small number of corporate clients. This rapid opening up of Government data was a significant moment: for the first time, developers had a wealth of flood level data available via data.gov.uk. The datasets included readings, updated every 15 minutes, from every flood sensor in the UK - effectively giving the hackers live data on the situation across the country. From 10am to 7pm, teams of volunteers clustered in groups to discuss, develop, refine, write and test applications and services that use flood level data to best effect. Throughout the day, support rolled in through social media, with the Prime Minister among those to Tweet high praise: “Great to see the UK's digital community coming together to develop tech solutions to respond to flooding.”

#floodhack culminated with pitches from sixteen developer teams who were each allocated two minutes to present their hack to a Cabinet Office judging panel. After hearing the presentations, the panel selected a shortlist of the most useful applications demonstrated. The chosen apps were:

Don't Panic – A system that allows people with and without web access to request and receive help, ranging from the delivery of materials, to local information. The system will record data for future analysis and real-time response planning.

UKFloodAlerts – An alert system that allows people to select a predefined specific alert, such as power loss, a burst river bank, flooded roads/paths etc., with those in the local area being instantly alerted by app or SMS.

ViziCities – A tool that visualises flood levels in 3D using the ViziCities platform.

Who do I call when I have a power cut? – A service that lets people look up their Distribution Network Operator based on their postcode, connecting them with the right people when their power is cut.

Citizen Flood Journalism – A service that located people tweeting from flood-affected areas and messages them to request photographs and descriptions which are then compiled into a geo-linked feed of flood-related information.

MyState – A service that allows people at risk of flooding to register themselves and their state using their phone to access the best information to help themselves and request help from others. They can also opt-in to receive warnings for their location should conditions in their environment escalate.

Joanna Shields, Tech City UK chairman, who led the initiative said: “Government called on the tech community to best use its wealth of flood data and the response we saw from developers has been fantastic. Over the course of the weekend we had hundreds of people volunteer their time to produce genuinely innovative apps that are testament to the creativity, imagination and generosity of our local tech community and demonstrates the power of Government opening up data.”

As the success of #floodhack demonstrated the power of the open data movement, there were calls for Government to continue to release more data to spur the creation of future innovative public services. If and when this happens, one thing is certain: there’s a thriving tech community waiting to collaborate.

Even the Foreign & Commonwealth Office…

“Open Data” and “the Foreign & Commonwealth Office” (FCO) are not phrases that you see together in the same sentence very often. Yet the FCO has unique information in its archives, like details of every treaty the UK has been a signatory to since 1834, and generates information on a daily basis on things like the human rights cases in countries.

To explore how this data could be used the FCO held a hackday in January 2014. 28 developers from all over the country, ranging in age from GCSE students to pensioners, were brought together in the Impact Hub Westminister. Their challenge was simply to do whatever they wanted with the information FCO holds. The winning entries were:

TINATAPI – an API with information useful to travellers such as areas of risk, travel alerts, and human rights information.

Relations Tracker – a heatmap for analysing the international relations of the UK using weightings of data such as treaties signed, membership of international communities, and trade levels.

FCO Data On the Operating Table – a challenging but constructive analysis of what the FCO needs to do to improve the quality of its data, and what other data would be useful for developers to have.