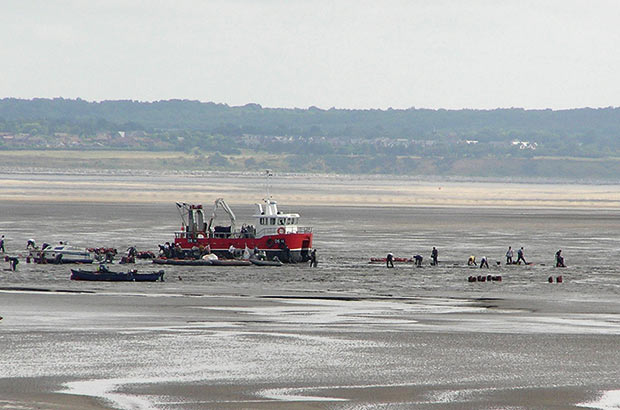 Ten years after 23 untrained and inexperienced cockle pickers were drowned at Morecambe Bay, Paul Fearn of the Gangmasters Licensing Authority tells how the organisation continues to tackle the exploitation of workers, and how the recent move of the organisation to the Home Office will strengthen their enforcement work.

“They talked about finding me a job in England. England! I thought. I’ve never been there. Let’s go!”

These were the enthusiastic first thoughts of Frantisek Ruzicka, who hails from the Czech Republic and was looking for a fresh start in a new country. He left Prague on the promise of a decent wage for a hard day’s work... but what was sold to him and what transpired in the East Midlands were worlds apart.

It is possible to report on the shocking but true story of the 44-year-old because he was lucky – one of 11 workers ‘rescued’ during a joint operation by officers from the local police, the National Crime Agency (NCA) and the Gangmasters Licensing Authority (GLA). He is now attempting to make another new start in the UK – learning English and being assisted in finding a job.

Though the case provided what Derbyshire Police described as a ‘massive learning curve’ for its officers, the scenario was only too familiar for enforcement staff at the GLA.

GLA Chief Executive Paul Broadbent explains: “Frantisek is a typical trafficking victim. He was duped into travelling to the UK, charged an illegal ‘finding fee’ for the job, driven into debt and forced to work long hours for very little money. It’s a story the GLA has been uncovering more and more in recent months.”

Help arrived for Frantisek when one of the 11 workers being controlled by his traffickers sought help from the Salvation Army and within weeks a joint operation had been planned and executed. The offenders, the Marcin brothers, and their wives were arrested, charged, convicted, and sentenced to periods of imprisonment.

Of the 11 workers taken from their houses in Derby eight returned home. Frantisek and two others remained in the National Referral Mechanism – the UK’s formal process for victims of trafficking.

The GLA was established to create a framework for the prevention of exploitation of workers. While the GLA looks to see if employers have checked if their employees have the right to work in the UK, illegal working is not the main problem we come across. Employers intent on exploiting workers will opt to use legal migrants because they have the right to work in the UK and present no risk from the immigration authorities. These workers are also largely unaware of their rights and entitlements in terms of minimum pay, holiday entitlements etc. The GLA’s role is to ensure these workers are treated properly, and know what they should be paid and should expect from employment in this country.

Formed after the Morecambe Bay cockle-picking disaster when 23 Chinese workers drowned on the perilous sands, the GLA was created to prevent worker exploitation. The cocklers were sent out ill-equipped to deal with the conditions and even less prepared for what they should do if, or in this case when, things went wrong. They were being paid just £5 for each sack of shellfish they gathered from the freezing beach but they set out on their 40-minute trek to the fishing beds just an hour and a half before the tide turned and started to cover the sands. They were warned by locals heading in the opposite direction but failed to heed the warnings.

Though they had a mobile phone and called 999, they did not have sufficient knowledge of English to direct the rescuers to their vehicle. Only one person was removed from the sea alive that night, a man called Li Hua, who by sheer fluke was spotted by a Royal National Lifeboat Institution helicopter. His evidence helped convict the gangmaster, Lin Liang Ren, of 21 counts of manslaughter, facilitating illegal immigration and perverting the course of justice. In March 2006, Ren was jailed for 14 years at Preston Crown Court.

The potential dangers to vulnerable workers had already been recognised at the time of the tragedy by Paisley MP Jim Sheridan, who had introduced a Private Member’s Bill shortly before the disaster. The bill gathered momentum and was adopted by the Government, becoming the Gangmasters (Licensing) Act of 2004.

One of its provisions was to create the GLA, which was established in 2005 and began issuing licences in May 2006. The Act also created a number of offences – most notably acting as a gangmaster without a licence and employing the services of an unlicensed gangmaster.

How the GLA has evolved

The GLA’s strategic aim was adjusted in 2013 but it remains true to the founding principles. It now reads: “Working in partnership to protect vulnerable and exploited workers.”

The authority went through the Government’s Red Tape Challenge in 2012 to reduce any unnecessary burden it may place on business. On 9 April, the Prime Minister announced that the GLA would move from the Department for Environment, Food and Rural Affairs to the Home Office, so it could concentrate on tackling the most serious cases of worker exploitation. Cases like the one in Derby.

Frantisek was certainly vulnerable and severely exploited. He was forced to live in an insect-infested room and sleep on a bare mattress on the floor. Though he had only been promised £50 per week, the amount was enough to tempt him to leave his homeland. However, he soon became a 21st century slave.

As he explains: “The day after I was brought over I found out that I already had a £350 debt. I was made to work in a flower factory and then in car washes but I would actually get only £10 per week, sometimes £5.

“We were each given one salami for lunches to survive on for a week – week after week – just one. When we were supposed to have dinner they would cook us simple pasta or potatoes.

“My boss had taken all my documents. All I had was my Czech ID so it was impossible for me to find work elsewhere. I thought about going back home to Prague but how can I do that with no money?”

As well as three other men, Frantisek shared his room with dozens of beetles in the house in Derby. They would eat away at him as he slept often waking him in the early hours. They left him covered in bites and he said the itching while trying to pack flowers was near unbearable.

By contrast, the traffickers led a very different existence. They controlled workers’ bank accounts and their wives would dip into them for ready cash if they were short – though the term ‘short of money’ is not one that seems to describe the general condition of the Marcin households.

The two men were often to be seen draped in gold jewelry or flashing money around in casinos and they drove around, or were at times driven around, in a variety of expensive cars. Benefits claimed in the names of those they trafficked to the UK totalled £101,168, though it is estimated the total profit gained from exploitation could have been £1.3 million.

The conviction of the Marcins was a welcome result for all partners involved and one of a number of recent successes enjoyed by the GLA as the focus switches to dismantling organised crime groups.

Working with the police

In addition to the GLA’s own enforcement powers, the authority has the ability and capability to carry out surveillance (under the Regulation of Investigative Powers Act). It also has the capacity to carry out the confiscation, or civil recovery, of assets that have been gained through criminal activity from offenders (under the Proceeds of Crime Act) if the defendant is judged by the courts to have a ‘criminal lifestyle’. The GLA works closely with other law enforcement bodies, police forces and the National Crime Agency (NCA) providing tactical advice on evidence gathering after the law enforcement bodies have executed warrants and arrested suspects. Moving to the Home Office will help the GLA develop their relationships with the rest of the law enforcement family, strengthening their focus on enforcement.

Aside from the police, the GLA is one of the few non-law enforcement bodies that is a ‘first responder’ to reports of forced labour and human trafficking. It refers a significant number of trafficking cases to the NCA’s UK Human Trafficking Centre – a multi-agency centre that provides a central point for the development of expertise and cooperation in relation to the trafficking of human beings. The GLA’s small team of officers, working from their home addresses throughout the UK, are called upon to assist police forces in understanding the mechanics of forced labour offences.

The authority is also a member of the NCA’s Organised and Immigration Crime task group, which focuses on all forms of trafficking and exploitation. Its close relationship with the police and NCA is demonstrated by its authorisation from the NCA to use and contribute intelligence to its organised crime group mapping system. The mapping system identifies the nature and scale of serious criminals and their connections throughout the UK. Some of the information, where high-priority groups are identified, is fed into monthly Serious and Organised Crime Group meetings, which are attended by the GLA and chaired by the Home Secretary.

In December, unlicensed Norfolk gangmaster Audrius Morkunas was jailed for seven years for running a very similar operation to the Derby example above. From his previous experience as an Assistant Chief Constable Paul Broadbent is aware, however, that further education is needed among police forces to teach them how to spot and deal with organised criminals who are in the business of exploiting workers for profit.

“These cases are often extremely complex and hugely resource intensive,” he adds. “You are typically dealing with large numbers of people who speak little or no English, many of whom have an innate distrust of ‘the authorities’. In a recent operation in Cambridgeshire, for example, we removed around 80 workers from more than a dozen addresses.

“You need to speak to them all so it’s a hugely time- consuming task working with numerous interpreters to get statements and even then, in some cases, we need witnesses to stand up in court and testify against people who have been threatening them for months, sometimes years.

“For a migrant in a strange country who fears violence against themselves and also sometimes against their families back home, this is a massive ask.”

However, in some cases it can and it does work and Frantisek sums it up quite nicely when he says: “My bosses wanted everything and they have ended up with nothing.”