Back in the 1980s, everyone thought that by now we would all have robots like R2-D2 and C3PO working diligently at our sides. While that has not quite turned out to be the case for most, here in the DfE comms team we recently welcomed the Government Communication Service’s (GCS) very first robot.

Now, ‘Automated Robot Negating the Onerous Logging of Data’, or ARNOLD to its friends, doesn’t look like the robots we all imagined. It is actually a computer programme, but it is having a massive impact on how quickly and effectively we are able to communicate with the public and address their concerns.

Effective, responsive communications and engagement with the public and taxpayers has to be at the heart of all public service. The search for a new approach to managing these contacts has focused on using technology to improve the accuracy with which they are handled so that they can be responded to in a timely and appropriate way.

Robotic Process Automation (RPA) is an emerging trend in government and an increasingly popular technology in both the public and private sectors. In essence, the robots here are programmes that harness artificial intelligence to make decisions about how data is handled. It is known to reduce costs and boost productivity, as well as improve the accuracy of data collection while freeing those who were collecting the data to focus on other tasks.

Seeing this trend, the Strategic Improvement (SI) team in DfE’s Communications Directorate approached other departments to learn more about the technology. Having now applied that technology to our own work, we can testify to the benefits it brings.

Before ARNOLD arrived, the DfE responded to the public’s important questions, comments and complaints – around 120,000 of them each year – by manually inputting data into a system. Each email and letter needed to be read, understood and categorised before it could be allocated to the correct person for a response.

Knowing that, in the private sector, the emerging practice is to move away from doing this kind of thing manually, the team took the bold step of exploring what robots could do for us.

Once they had gathered best practice advice from other departments about the success of RPA in their areas, the SI team applied what they had learned to create a proof of concept robot, which would grow up to become the ARNOLD we now know and love. Delivered through the Cabinet Office Centre of Excellence (CoE) for RPA framework, this scans the content of emails, prioritises them based on risk, and then completes the data entry into the system.

ARNOLD operates on a set of rules to make decisions when processing incoming emails. These rules help the robot to classify each email through hundreds of variables and distribute them to the appropriate parties for response. ARNOLD has now replaced the manual data entry of all user emails and letters.

What it means in practice is that we can make sure that our team focuses on delivery rather than admin. It frees us up to focus on our channel shift strategy so that we can keep pace with the changing way in which people want to contact government departments – moving beyond traditional letter writing and the public helpline and more towards live chat and social media.

Put simply, and fundamentally, with ARNOLD doing the admin, we can better spot the important issues that people get in touch with the department over, from child‑safeguarding concerns to under-performing schools. 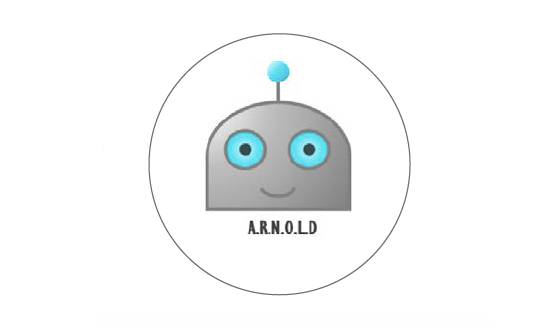 With this being the first robot in DfE, and the GCS as a whole, one of the principal challenges was both winning support for the concept from users and getting their feedback for iteratively improving the efficiency of the robot after it went live.

Within a limited budget, the team was looking for innovative ways to use technology to deliver quicker results and free up staff time for other duties. At the beginning of the project, in November 2017, they were unsure whether the robot would be able to scan unstructured emails and letters accurately. The easy thing at this stage would have been to walk away. The key was to confront the problem, stay focused on the potential outcomes and apply problem‑solving skills to issues as they arose.

The team made full use of data and worked with stakeholders to develop and modify the robot to increase its accuracy and get user emails to colleagues drafting replies more quickly.

The robot creates a report for everything that it logs on the database. There are checkpoints throughout the process and, when it encounters a possible problem, ARNOLD sends out an alert, prompting colleagues to review a particular email. It also flags any exceptions or wider technology issues that prevent it working as expected. The team can then investigate and take corrective action where needed.

This approach is consistent with the idea that ARNOLD is part of the team – everyone is clear about roles and where technology plays its part. Where problems are raised, all emails and letters are also checked by staff, with any issues identified and corrected, and iterative changes made to the robot if required.

Running the project has led to the team developing networks of contacts across government, including with other departments who might be able to use the robot code in their own correspondence systems.

How RPA can create real value

ARNOLD has already proved its worth. As of November 2019, it had logged over 24,000 user emails, and reduced by nearly a third the time it would have taken (over 145,000 minutes or 100 days) to process them manually.

One of ARNOLD’s most important functions is its ability to scan and review an email in order to identify extremist messages or children at risk. These emails are flagged, expediting response times and enhancing the department’s ability to provide critical support where necessary.

On top of this, the department has already seen reduced waiting times for users, greater email processing accuracy, and reduction of back‑office processes.

The potential for robots to improve communications across government is huge. In DfE, with the introduction of RPA, what was once a repetitive manual process is now more efficient and streamlined, using an innovative and low-cost solution. The challenge now for the SI team is threefold: to scale up the way RPA works in the department, join up processes, and build on its cross-government networks so that they can progressively improve ARNOLD’s efficiency and deliver even better service to the public.

The Automation Marketplace - the next step for RPA in government

In 2017 the Cabinet Office launched a three-year RPA partnership with an external supplier, with the aim of accelerating the adoption of RPA across central government. This partnership has successfully supported departmental investment in automation, but as it comes to an end, a new commercial route is needed.

Building on the foundations of the RPA Partnership, and to help government get serious about automation, Crown Commercial Service is launching the Automation Marketplace from March 2020. Valued at £100 million over four years, the marketplace will be an electronic platform (Dynamic Purchasing System – DPS) that will offer a wide range of automation services to the public sector, helping departments access expertise and technology more easily.

For additional information please refer to the CCS website.